Sarah Jackson, an undergraduate student in Kwantlen Polytechnic University’s journalism program, made news in New York with a 10-week winter internship at MSNBC where she helped produce live television.

In 2010 Jackson received Kwantlen’s prestigious “John Reiss Award in Journalism,” named after the executive producer of MSNBC’s Hardball with Chris Matthews. She has also won seven other student awards and has been on the Dean’s Honour Roll six times.

After Jackson sent her internship application to John Reiss, her talent was recognized right away and she was invited to MSNBC’s New York studio to join his adrenaline-driven team of top producers and technicians. Read more……. 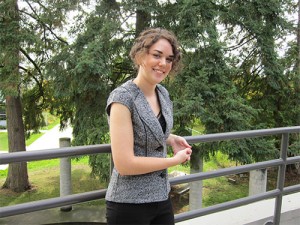